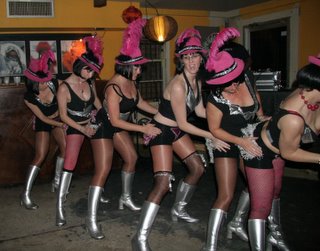 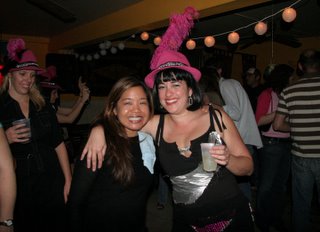 Last night, some friends and I went to Shiloh- a funky, hole-in-the-wall club off Tchoupitoulas, near Dick n Jenny's. My friend Cyndy Garza from college was dancing with her group- the Camel Toe Steppers!

We got there just in time to of course, miss the performance. Never fear though- because they are in such high demand, we were able to catch their encore performance. They were awesome and all the steppers that I met were so cool and full of life. This night out was just what I needed since it had been too long since I've "gone out on the town" (Not that a couple hours out was painting the town red or anything, but just nice to be out with friends).

Oh-- and I actually won something in the raffle drawing.. they were giving away these really cool t-shirts and mine said Metairie- A safe place to live. It was awesome and there is a pic in my photo gallery with me holding it up.

It was a great night and it was fun to see my girl Velvet who I had not seen in ages- since October I think! She is always a ton of fun and so was everyone else. I hope Cyndy and I can get together more often because it was so great seeing her last night. The steppers rocked the house!
Posted by rizanola at 9:47 AM