Seeing Dena, Rock Climbing in Malibu Beach and going to see Coldplay at the Forum 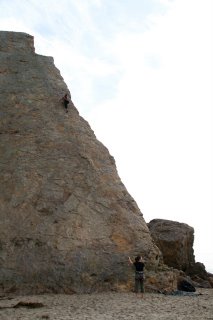 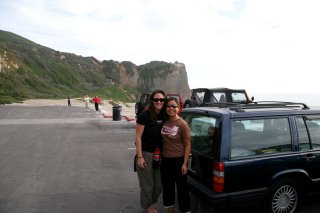 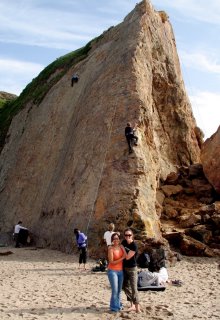 I just got back from my 6 day venture to California and the first stop is Los Angeles. My good friend Dena, we went to high school together, picked me up at the crazy LAX airport and we headed to go rock climbing in Malibu Beach! Dena just moved from Seattle to LA and just loves southern Cali. But living the life of Dena Rigby is no easy task.. but somehow she gets it all done.

It was a nice drive up to Malibu Beach and we talked the entire way up... actually, we never stopped talking the entire time we were together, catching up on old times and talking about what's to come. She lives in the Valley in a cute apartment with her lovely cat Monet (who I wasn't too allergic to!). We met a couple of her friends at the the cliff to do some real rock climbing! This was my first time actually climbing outdoors so I was totally excited (That's me climbing the rock in the photo-the little speck almost at the top). It was a beautiful day there, low 70s, sunny and breezy-- typical weather for those guys. I climbed all the way to the top of the rock and I felt fearless. The view from the top was spectacular and I could of stayed up there all night. Dena and the other folks ended up climbing around the corner from me and that climb was a little more advanced for me!

After climbing and taking a million pictures, we headed to the Valley where Dena lives to go take showers and get ready for the evening. My bags didn't arrive with me, so I am just borrowing all Dena's stuff (thanks Dena!) and we were going to have my bags delivered to Robert's house-- Dena's friend who is very sweet and it looks like Robert and I might become better friends than expected! (Robert is going to buy my house in Lakeview! The contract is already signed and the deposit is down!!!! Yea!!!) So we take off to Roberts and there he had jumbo cocktail shrimp for us, sushi and delightful raspberries which I devoured. His place was really swank and it overlooked the water- life doesn't get much better than that!

After we got to know each other a bit and ate our delicious dinner, we headed out to go see Coldplay (thanks for taking us Robert! We had a blast) at the Forum in inglewood. It was a brutal hour and a half drive... but well worth the wait. It was an incredible live show and they sounded BETTER than their cd's. Coldplay packed the house ... it was one awesome live performance and they are so captivating to watch.

After the show, we ended up back at Roberts and my bags finally arrived at his house! I was so relieved because I couldn't do the reg testing for ScubaLabs without my stuff. We then made it back to Dena's for some R&R. I had stayed awake for almost 24 hours straight and had to get up in the AM to head over to Long Beach! Thanks Dena for a fantastic time and I hope to be out there again soon!
Posted by rizanola at 10:01 PM

That was quite a productive trip (as in you go for fin-testing and vacay and sell your house?!?) Life works out nicely sometimes.