It was another early morning but actually, we got to sleep in a little bit because instead of trekking up (only a 45 minute trek), we rode the bus up which was a blessing because everyone's feet hurt. Instead of 4, we got to sleep until 5:30a, we ate breakfast and then walked towards the bus station. It was a long windy road to get to the top and the ride made us even feel a bit queasy. But we finally made it to the top, before the sunrise and got to watch the sun illuminate this amazing structure. 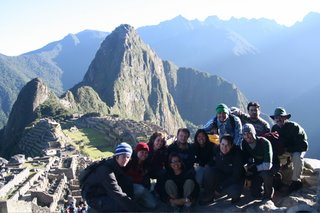 Machu Picchu was built by the Incans and its called the lost city because it was built in the 1400s and when the Spaniards took over, the city of Machu Picchu was never found since it is hidden high in the Andes and is between a block of highlands. It wasn't until 1911 when an American actually discovered it, Hiram Bignham. This is a picture of what it looked like and the massive door in the front is the main entrance, actually the only entrance. 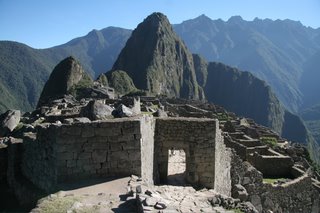 It was amazing to be there to see how they built this city where about 1,200 people lived and to see how solid these buildings were made and how the blocks fit perfectly without mortar, although none of the blocks are the same size and have as many as 30 corners. 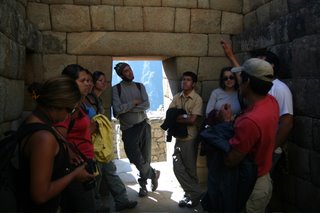 This is a picture of their sun dial or astronomical clock. As the winer solstice approached, when the sun seemed to disappear more each day, a priest would hold a ceremony to tie the sune to the stone to help prevent the sun from disappearing all together. They would pray and pray for more sun and when it was approaching summer and the sun stayed out longer, they believed that this was a miracle and that the Sun God listened to their prayers. 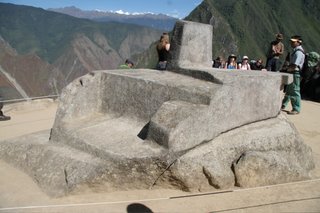 Llamas were sacred and white llamas were then sacrificed to the sun, which was their God. 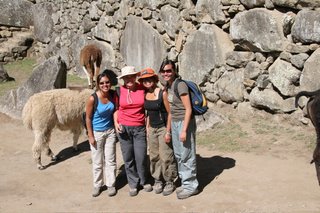 There was a massive rock where the Incas would go to meditate and re-energize themselves and pray to the Gods. Here we are trying to re-energize and pray good things come our way. 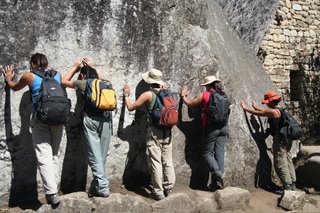 It was such a site to see and I hear that on the weekends sometimes, they have moonlight tours that would be really cool- but its usually not announced and you have to ask. It was a physically exhausting trip but it was worth the experience for sure. 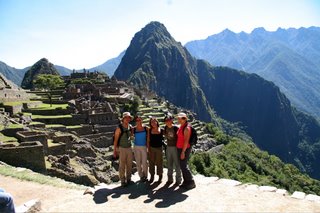 After we left there, we headed back to Aguas Calientes to grab our things and get on the train back to Cuzco. Another long day.
Posted by rizanola at 6:55 PM

I wish I could blog as good as you, but what I can do is give you a nice Guitar Lesson!