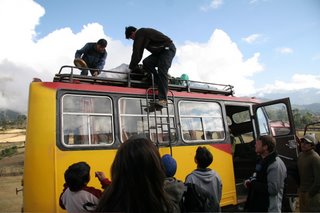 The bus picked us up at the Hotel Royal Inka at 4:30am- ouch. It was dark, we were cold and still half asleep, the bus took us to another place where we waited and picked up more trekkers and headed to Molepatta where we started our trek. The ride was about 2-3 hours long, I can't quite remember.

We got there about 8:30am and Ceasar and Rodrigo (our guides that we met the night before at the briefing at the hotel) introduced our team we will be spending the next 5 days with. There was Ben and Ed, two guys from England who just met 2 weeks before the trek in Quito- Ben going to law school after the trek and Ed still traveling for a few more months and doing odd jobs to get money. He got robbed right before the trek- someone pick pocketed him on the bus but he was still in high spirits and was the entire trek. Fredrico was from France and couldn't understand anyone except Roger who spoke a bit of French and he could speak a bit of Spanish but was exceptionally nice- even carried our bags when we needed help. Rodolfo was a local from Lima and used to be a track star although had some trouble with his knee and he was also super nice. Then there was the 6 of us- Cynthia, Claudia, Rose, Roger, Shay and me. 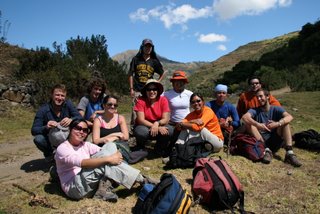 Before the trek- Ceasar buys some coca leaves from one of the locals and cheese (which is actually a hard substance, black in color, made up of water, sugar, coca leaves, etc.. and in the form of a ball- you break off a tiny piece of it and fold it in the coca leaf and stick in your mouth.) We all took turns with the leaves and cheese and you would stick about 6-8 of them in your mouth, like chew, and just suck on the juice that came out of the leaves. This would help with altitude sickness and back in the day, the Inkas would suck on these leaves to help them from getting hungry. After about 20 minutes, you would spit the leaves out and put new ones in. 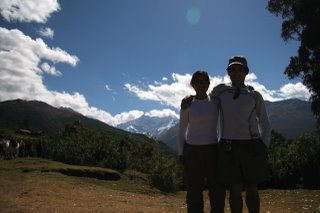 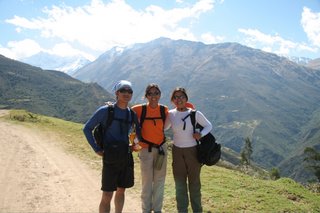 In the first hour of trekking, Michelle started to get cramping and her head was hurting and had to stop. Rodrigo stayed back with her and they slowly walked, then would stop, etc... It got to the point where the altitude must have gotten to her because she just couldn't go on anymore. They made the decision to get the horse to come pick her up and take her the rest of the way for day 1. Finally- the trek begins and they take us through the town of Molepatta where the trail started. Right off, the trek was tough. Partly because we were still trying to acclimate to the altitude and also because the terrain immediately started steep and the terrain really tough. I didn't even take my camera out until the path was a bit wider and not so steep. This trail was 10 times harder than all of us thought- rocky paths, sometimes no paths and you would have to cross rivers, avoid muddy, mushy patches and practically rock climb some parts because there was no path. 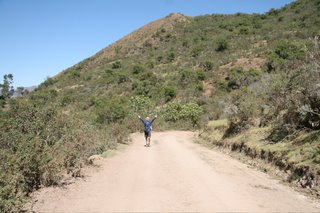 We finally get to a brook of fresh water so we could all fill up our water bottles... thank god we bought these Katadyne bottles with filters so that we could fill our water bottles up anywhere- highly recommended! 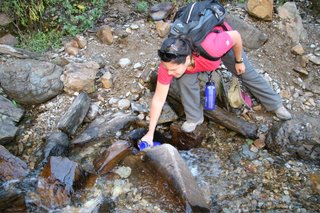 After over 5 hours of straight trekking, we finally get to our lunch site- it was nearly 2pm. We were starving and the cooks had lunch prepared for us. Normally, we would always have coca tea to start, some delicious soup, our main course and a little treat at the end- either yogurt or fruit or something. Yes, we ate VERY well on our trek. We ate, got a little rest before we had to face the next 3 or so hours.

It started to get cold after our lunch so we had to stop and change and add layers... 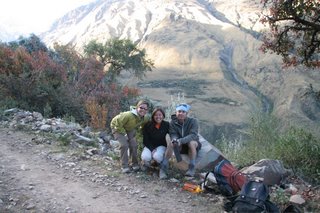 Everyone was getting tired towards the end and since Ed and Ben were very fast trekkers (they were just in the Andes before this), the group had split up so there were only a few of us in our group. They kept saying 20 more minutes but that was like a couple hours ago. We stopped at a stand to get some snacks and there was the cutest Peruvian girl so I gave her one of my chocolates and tried taking a picture with her. 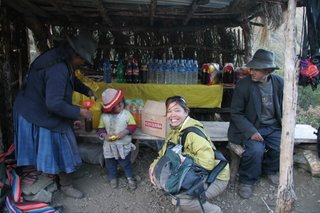 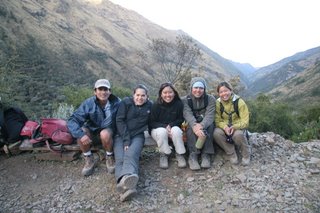 We rested a bit and started again. It was growing dark and we still couldn't even see our campsite. We passed about 10 different ones but none of them ours-- turns out that ours was the furthest campsite away, in a middle of a field and we had to cross 2 rivers at the end which freaked me out because I was so tired I could hardly see. At one point, Claudia's foot went straight into the mud and Ceasar had to pull her out. 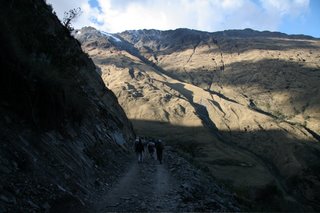 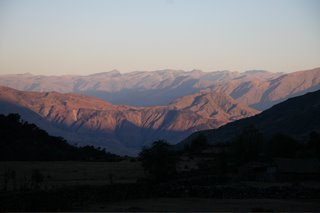 Finally we reached our campsite- Soraypampa and it was freezing by this time. It was nearly 6pm and when we arrived, our tents were up and the cooks were starting on dinner. The bell always would ring about 6:30p for tea time (coca tea of course) and then our dinner would start after that. We crashed right after dinner- well, tried to anyway- it was hard for me to sleep at night. 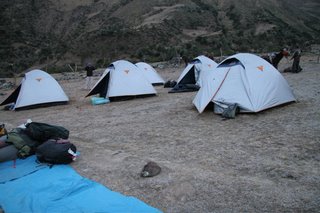 At last, we could see Salkantay much better because we were getting closer! By noon tomorrow, we should reach the peak. 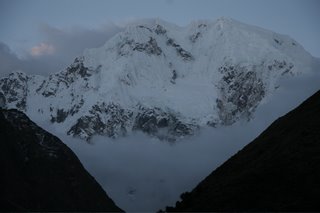