Today we did three dives on Wolf's Island which is actually made up of a few different islands. The first dive that we did was just to see bat fish which we actually saw! I have one picture but it sucked so I got this one from my buddy CP. 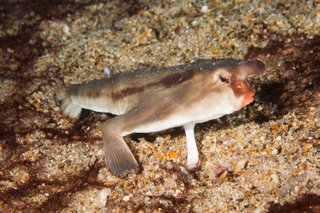 After that dive, we moved to a differet spot in hopes to see Galapagos Sharks, which look like great white sharks, except smaller. Only CP saw these sharks and saw 5 of them-- we didn't see any. (CP always finds the good stuff- bastard.) 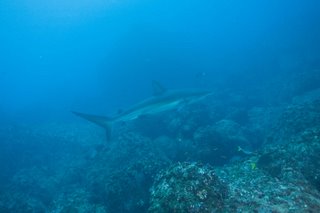 The dives today were great... less current but there was a slight surge that would push you up five feet and back five feet over and over.. but if you got your buonancy right- then you could just hover over the corals and the rocks and it was nice to just go with the flow- you barely had to kick. Again, we saw a ton of hammerhead sharks and these came a bit closer than the ones the last 2 days.Plus, since there wasn't such a strong current- you could actually manage to take pictures instead of just firing off shots in hopes to get something.

On my 4th dive, I got really close to a turtle who checked me out for a while and let me take lots of pictures of him really close up. Now I see what double strobes can really do and it makes such a difference. I actually used CP's focusing light and my turtle pictures turned out the best. 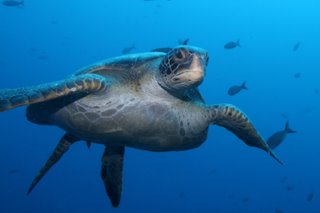 On that same dive, again we lost CP and when he got back to the boat (it seemed like an hour later but Chino spotted his bubbles and brought him back on the dingy)- he told us about a giant pack (200-300) of sharks that swam right under him during his safety spot-- I knew I should have stuck with him on that dive. 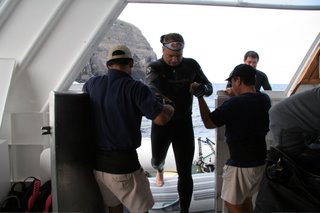 Back on the boat, Rose and Amy hung out and had a marathon movie day.. Rose is holding up pretty good even though she can't dive... she is really being a great sport about it. Later in the trip, we should have more land excursion which she can take part in. I can't believe our trip is over half done already... time has been flying by.
Posted by rizanola at 10:05 PM