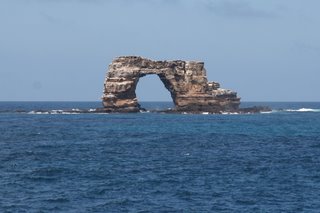 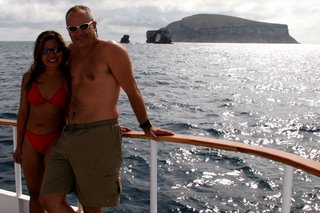 We sailed all night long (15 hours) and woke up to find ourselves in the northern part of the Galapagos Islands called Darwin Island. Here is where you are sure to see whale sharks and that in fact we did-- saw whale sharks, among other cool things.

I got a lot of sleep last night and woke up refreshed when the bell rang at 6:30am, as it always rings at that time every morning. We all had breakfast and got ready for the dive briefing at 7:15 on the sun deck. Right after the briefing, we got ready to get in. The water is really choppy here and there are strong currents so 6 of us would get in inflatable boats that would take us close to the rocks where they would drop us off. 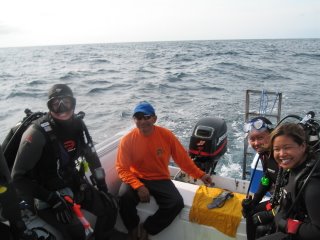 Once all 6 divers would get in the water at once by back flipping off the side, we would grab our cameras and start to decend quickly as the current is stronger at the top so you would want to get down as fast as you could. Once you are down, you would have to hang on to a rock or you would be swept away by the current.

The first dive, the current seemed strong but not so bad. Right away- we saw hammerheads come our way... first one, then a couple, then a ton of them would be swimming by. They would look our way and then turn because they are so scared of the bubbles. 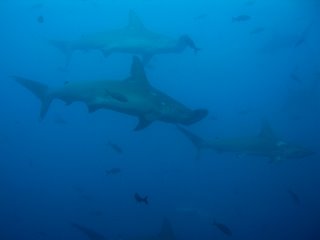 It was a cool dive- but then dive number 2, we went down and again, saw the sharks but this time the current was twice as strong. I got beat up in the rocks by the current and this time my dome port got knicked by the rocks. I couldn't get all the air out of my BC and by the time I did, everyone was already down and I had been swept away by the current. I just kicked as hard as I could to get to the nearest rock and crawled my way to where I could see bubbles in the distance. I finally saw Rose's fins and when I got to her I was so exhausted I couldn't move.

I was already ready to go up when I heard the clinking sounds of the divemaster which I knew he had spotted a whale shark. Everyone started moving fast towards the sound and there it was-- one was above me AND one was below me. I couldn't even start taking pictures because I was so amazed by its size I just watched it... and then as it moved away from me a bit and I could actually fit it in my view finder, I started shooting until it disappeared in the blue. It was such a sight-- it was big and beautiful and it was the reason why I came to the Galapagos. 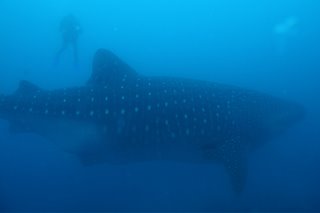 I did 3 out of 4 dives today and that was plenty for me... the current was just too strong that I had to take a break. It was a great day and looking forward to doing this again tomorrow. But for now, I am going to take a nap, eat dinner and then I will be out for the night.
Posted by rizanola at 9:29 PM

What a rush to see a monstrosity of a fish!