It was a very early morning this morning when our wake up bell rang at 4:30am (which was actually supposed to be 4am since our ride left at 4:30am, but Rose and I got ready fast!). We met our driver downstairs and his name was something like Amnival- but we said it differently everytime. He couldn't speak any English so the ride was pretty quiet most of the way. It was still dark when we left the hotel and we all tried to sleep in the car since it was a 3 hour drive to Paracas.

We finally arrived and were led into this room full of other tourists and we all had no idea what we were in store for. We knew we were going to see a marine sanctuary but that was it. After about a half hour of standing around- they led us towards the dock where a small boat awaited all of us- about 25 or so passengers. We had no idea we were going to have to take a 30 minute boat ride over to the island and we were certainly not dressed for it. It was freezing and I was getting wet since I was closest to the side of the boat.... Thanks Shay! 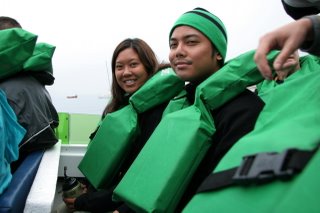 They took us to the sanctuary where we saw about a million birds, a ton of penguins, sea lions and crabs. It was really cool but right as we were coming up to the island you could smell the seal/bird excrement and it was so strong sometimes I think I can still smell it. The guide was also pointing out these shapes that the rocks made like one of a face looking down into the water (picture shown below), and one of an elephant, etc... We toured around for about an hour and then headed back to where our driver was waiting for us and then off to see the Nasca lines. 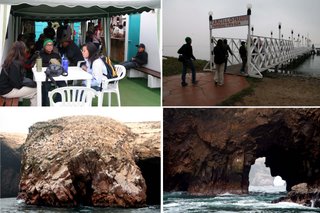 We had another 2 hour drive and 2 stops until we reach the planes to see the Nasca lines so on the way, we stopped at this little gas station and got some chips, coca cola light and cua cua (these little mini wafers covered in chocolate... delicious!). We first came to this tower where we walked up to see one of the Nasca lines and we bought some postcards from the vendors there. We then stopped at a little museum where they had the drawings and sketches of Maria, who came over to Nasca from Germany and dedicated her life to learning the Nasca lines. It was pretty interesting but the best part was when we got charged by lamas! There were 2 lamas there at the place (and they are mean- they bite and spit at you!) and first they ran towards us (and Shay has great video of that!) and then they blocked the entrance so we couldn't escape...it was hilarious. After some time, the guide finally got his attention away from us and we scurried quickly past the lama to where our driver was. Then we hopped in the car to head to where the planes were that were going to take us up to see the rest of the lines.

The place seemed pretty disorganized and we stood around for a long time waiting until they called us over to another place where we sat around again waiting for the plane. The 4 of us and another guy were the last of the group to get on the plane- and it was scary because there were about 10 guys working on it right before they called us over to hop on.

Rose sat in the front seat, Roger and the other guy in the center and Shay and I in the very back. We had a shaky take off, then once we got a little bit situated, the pilot spotted the first image, a whale, and then turned a hard right and the plane turned sideways so you could take a picture. Immediately, everyone started to feel a bit sick but kept on shooting photos anyway. At the end of the rid with 5 minutes left, the guy sitting next to Roger puked everywhere! If I saw him do it- I would of puked myself. We felt so sorry for him and Roger just patted him on the back as he kept apologizing over and over.

The flight was actually very amazing (besides the motion sickness) to see these Nasca lines in the middle of no where and these lines have been here for over 2000 years. It looks as though the surface is really hard (where the lines are carved into) but its actually on very soft terrain and its crazy that they have lasted this long-- and its not even carved down very deep. Here are 4 pics I took to give you an idea- one of an astronaut, monkey, spider and bird (and more to come on flickr when I get back). It was cool to experience this and see it first hand... but I was ready to get off that plane and get some food in us- we hadn't eaten a real meal all day and it was almost 3pm. 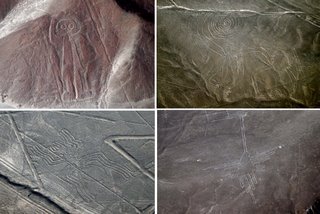 After the flight, our driver took us to Rico Pollo for some Peruvian food and we chowed down like we've never eaten before. We had a 5-6 hour drive back to our hotel in Lima so we all stuffed ourselves hoping that we would just get in the car and fall asleep, I mean, we couldn't communicate with our driver anyway and I was still exhausted from traveling from the Galapagos. I didn't get to sleep on the ride back because there was so much stop and go and there was actually a bunch of tolls to pay. One time, we got pulled over by the cops but he never ended up getting a ticket- I guess cops there randomly pull people aside to check registration and liscense because after he showed that to the cop, he let him go.

We got to the hotel about 11pm and Claudia was already asleep and we saw Cyndy just for some coca tea and then we crashed hard.
Posted by rizanola at 7:34 PM