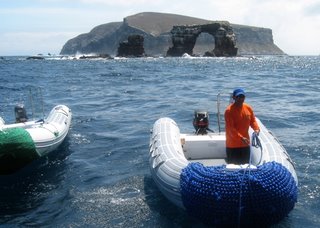 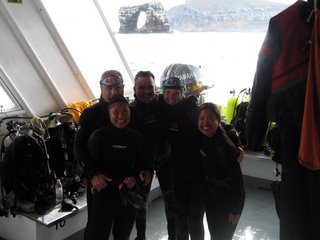 Today we dove Darwin Island again-- 4 dives in hopes to see another whale shark but that didn't happen today. We did see a ton of hammerhead sharks again and some cool tropicals and other sharks too. 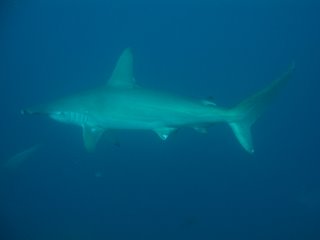 On the first dive right as we went down, CP and I saw this huge turtle under a ledge which came out just in time for us to get some close up shots.

The current was still strong today, I don't think as bad as that second dive on the first day at Darwin Island, but you still had to kick hard and hold on tight. When I woke up this AM, it felt like someone beat me up-definitely felt it from the day before.

When we got back from all of our dives, everyone was feeling a bit nautious-except the crew who was trying to get the World Cup game scores via satellite radio!- 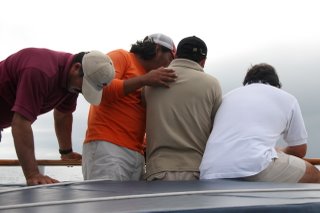 and we all thought it was because our patches were wearing off and we had to get a new one to help with motion sickness. It felt better when I was laying in bed, but once I got up- I felt like crap again. Rose was feeling sick too, except she had a tingling in her body, which is a sign of DCS- decompression sickness and sure enough, that's what she had. The crew immediately put her on O2 to help and they called DAN (diver's insurance) to alert them of what happened. Luckily, the tingling sensation was going away, which means she was getting better so thankfully- she is ok and thank god we had all of these dive experts with us. She won't be able to dive the rest of the trip-- but at least she saw the whale sharks which was our #1 reason for coming to the Galapagos!

We all crashed pretty hard and the boat is now moving to Wolf's island so when we wake up, we will be in a different spot. We have 3 dives there tomorrow and we hope we get to see Bat fish! They are really rare to see and have gills behind their fins, where prehistoric fish used to have them- and they have red lips. We'll see- cross your fingers! 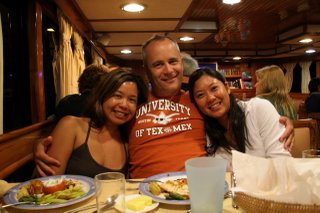