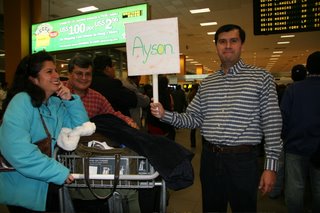 Today we had to be up again at our normal time, 6:30am for breakfast and to have our bags ready for the crew to take to the airport for us. It was nice to not have to lug all those bags around but unfortunately, we had to be off the boat at 9am even though our flight wasn't for another 3 hours because the crew had to clean to get ready for the next group. So we all hung out in the airport in San Cristobal doing some last minute souvenier shopping and drinking coca-cola light (finally, somewhere that had it!).

Finally, we boarded and had a quick layover in Guayaquil before landing in Quito. Our flight to Lima left 3 hours later at 8:30pm so Rose and I just hung out at the airport once again waiting for our flight. We got a hamburger and fries, which turned out to actually be chicken and fries and it was all right. We found a place to charge all of our electronics so we chilled there waiting for them to start boarding.

Close to 11pm CST, Rose and I landed in Lima and had to wait forever in the immigration lines, which were mostly made up of Americans. After about an hour, we tried to locate our bags which were just sitting in the middle of the floor and thankfully were all together. Shortly after, Cyndy found us since she landed about an hour before us and walked us out to where our travel agent, Suzanna was and her boyfriend Jose and this other guy Enrique. They had a sign held up that said "Ayson" and everyone was super nice. Thank god that Cyndy was there to translate because none of them could hardly speak english.

We found out that Roger made it around 6pm and the last person we were waiting on was Michelle to arrive. We waited another hour and then all of us headed for the hotel which was 30 minutes away and Enrique and Cyndy stayed behind to wait for Michelle. Turns out that she was in line trying to find out where her luggage was.... after trying for another couple hours, they finally headed to the hotel and got there around 2am. We almost got away with no casualties but hopefully when we wake up, they will be able to locate her bags.
Posted by rizanola at 7:30 PM