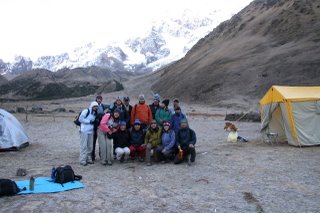 Michelle still felt bad on day 2 and now Claudia was feeling bad as well. We woke up at 6am today which is actually really late compared to some mornings we have been getting up. We had our breakfast all together in the tent before hitting the trail. 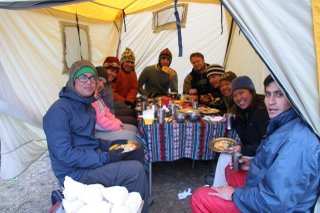 We started off the trek trying to go a different way to avoid the 120 soles entrance fee to the trail but one of the guards saw us so we had to go back down and around to the main part. They ended up only charging us 4 student rates (for all 10 of us!) so it was only 24 soles each... much better. Because of all of this we lost 2 hours and didnt really start trekking until 8:30. The terrain on this day was again really steep and tough. It was a consistent incline for the first 3 hours of the trek. This doesn't do it justice but here is a shot of the first part up..

About an hour on the trail, Claudia couldn't go much further and needed the horse to come get her this time. Shay lost her "Queen" title to Claudia. 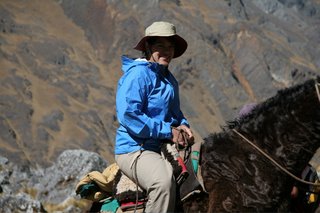 But before long, Michelle reclaimed her title. She started feeling bad again, so they traded places, one rested while the other one hiked- then switched. 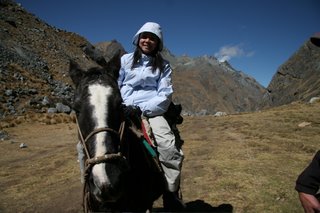 Before reaching the top, we decide to stop for a little break... to stretch and catch our breath! 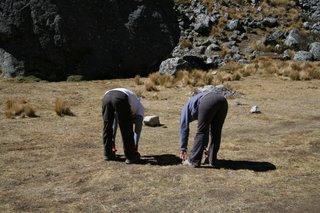 We were moving slow this day because everyone felt so bad from the 10 hours of trekking the day before but we finally reached the peak-- 3900 meters or about 15,000 feet. We took Ceasar's meter reading, converted it to feet and took pictures with it! 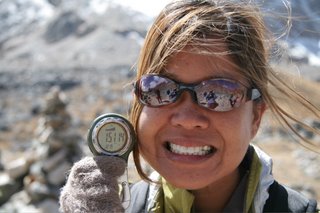 While at the peak, Ceasar did a ceremonial offering to the Inca Gods and this is where you offer coca leaves and some pure sugar cane liquor to the mother earth (pour some on the ground) and then take a shot of it. 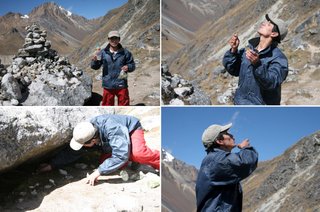 Women first and then men. 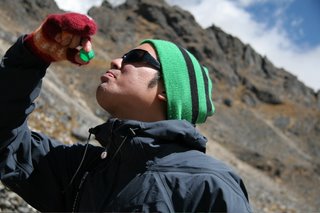 Before doing this, you take the coca leaves and blow above them in each direction N,S,E and W, a sign of respect. It was really cool and here are some shots from it. We took a group shot and then took a rock, placed it on any of the other huge piles of rocks around and made a wish. This is part of the tradition as well. 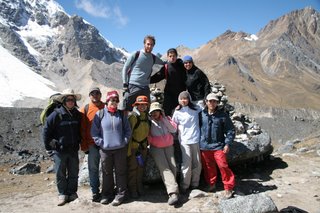 We stayed a bit longer at the top than expected and didn't get to the campsite for lunch until 3pm. Because we had a couple of set backs and were behind schedule, we had to set up camp there and were not able to finish our hike for that day. We only made it about 1/2 way and were supposed to finish closer to Challway 2,600. Since we didn't go the entire way, we had another cold night ahead of us (same altitude as the day before). Also, this meant we had to get up at 4:30am and start trekking to make up some time. Claudia and I couldn't even get out of our tents to go to dinner this night and the cooks ended up serving us at our tent! This was by far the worst night for me- I didn't get any sleep... not sure if it was the cold or just wayyyy too much thinking.
Posted by rizanola at 8:57 PM