After a couple of days in Catalina, we came back to Los Angeles for one night before heading on the 1 up to visit my brother and friends in San Francisco. We drove up the 1, then going back and forth to the 101 for a bit, then back on the 1. It was a beautiful drive and it was nice quality time we got to spend with each other, just Cecilia and I. Although, after a while, we started to get motion sickness from the winding roads and also the motorcyclists started freaking us out too! They would zoom so fast by us and it wouldn't be just one, but like 10 or so.

On the way, we decided to stop in Gorda to go camping for the night. It was a nice break since we had been on the road for about 5 hours or so. We ended up meeting Ethan at the campsite and it was a really nice time going down to the beach, climbing the rocks and hanging out. 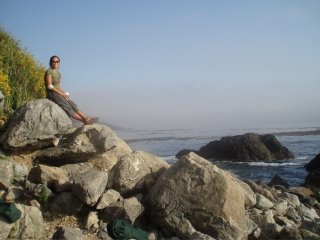 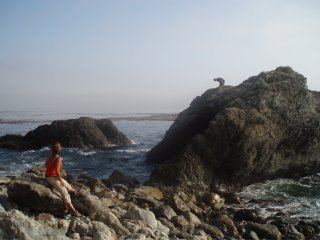 There was a part of the beach where there was a big arch that sort of looked like the arch I saw in the Galapagos. The left side of this picture is Darwin's Arch in the Galapagos and the other arch is the one at Gorda!

Cecilia brought stuff to make some spaghetti so after a while hanging out on the rocks, we went up to make something to eat and chill out. I played the guitar for a bit and then later we played some cards.

Since I have been having so much anxiety lately and its been hard for me to go to sleep, Cecilia made me take 2 benadryl and believe it or not- with having taken that and drinking vodka and whisky, I still only got 4 hours of sleep that night. She even took us on a night hike to help get me really tired. It was a really great night and there were about a million stars out in the sky. We could even see the milky way! I would have posted that picture that Cecilia tried to take of the stars that night, but it would just look like one big black square!
Posted by rizanola at 11:20 PM

Ha! Yeah too bad you guys didn't have a tripod to do a long exposure!

Gorda sounds awesome. I hope to camp there sometime, too. Glad you came in town, I really need to come to LA before you start working ;)

Lucky. The family and I used to go camping at Big Sur every year. It's been over 5 years since we've gone, I miss it. We even have pictures (in both color and black and white) at that arch with us in the water at low tide wearing matching outfits! There's also an arch that is almost exactly similar to Darwin's at Half Moon Bay that we take pictures at also. Did you get to hike the Waterfall Trail at Big Sur?