This was my first time ever at the Hollywood Bowl and it was such a beautiful night! The Brass Monkey Brass Band, The Neville Brothers and the Original Meters played! It was so weird to see New Orleans music live in Los Angeles. It made me a bit sad because it made me miss New Orleans just that much more. I wished all my friends from New Orleans could have been there with me, but my brother Ron was there... so I guess that worked!

It was a gorgeous night and you could tell who was from New Orleans and who wasn't... they played all New Orleans favorites so natives would yell and scream when their favorites songs were performed!

After that was over, Ron and I headed to meet my new friend Jane (from New Orleans) at a place called Gengis Cohen. It was such a cool and cozy venue- sort of the MTV unplugged atmosphere except the room only held about 50 folks. There were 2 women there playing acoustic guitar and one was a good friend of Jane's and her name was Libby. She played the keyboards and guitar and the other woman, Joan Jones, played those as well and the trumpet which was really cool. 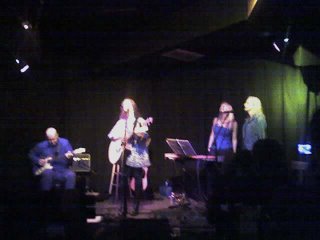 We all got to know each other after the set was over and everyone was super nice. They play every Wednesday night at 9pm so if you are reading this and in LA, come meet us next Wed!
Posted by rizanola at 6:13 PM