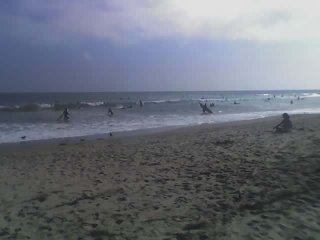 My friend Mattson took me to Ventura Beach on Saturday and thankfully got me a board and a wetsuit that fit me! We went to a few beaches until we decided on this one beach which was really good for beginner surfers- the waves were perfect for me- not too big, but big enough for me to learn! The water was really warm, my spring suit that I wore was only a 3 mil and I really could have gone just in my bathing suit. The water was so nice and refreshing! There were a ton of surfers out and lots of "classes" or little "surf camps" going on! I think there were more female surfers out then males-- you gotta love that!

I must say that Mattson was a good teacher because I caught like 10 waves! Well, that might have to do with him pushing me into all the waves I did catch. Me on my own? Yeah, not so much. But it felt like I rode the waves for a mile and sometimes I would go all the way to the beach where I would just hop off the board, turn around, get back in the water and hop back on the board to start paddling wayyyy out to where he was. Sometimes I was so far and had drifted so much I couldn't tell where he was anymore. He said I did good though so now I just need to practice more and get better! I LOVE it!!!!

We surfed for a couple of hours and the next day, I couldn't move a muscle-- and I ran and did an hour weight class before we even went surfing! I am addicted to it now and I think we are going to go again this week-- I want to buy my own board now!

We didn't get to take any pictures of me actually surfing since we were both in the water the whole time but here are just a couple shots I took with my camera phone (so that's why they look like crap!) 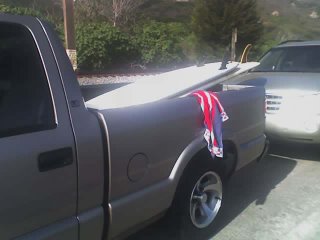