Well, my good friend Wendy and her friend Vanessa were going to Vegas for a Fashion convention, so Eva and I decided to join them at the Palms Hotel. We drove up on an early Sunday morning and stayed until Tuesday. Despite the fact that I was sick almost the entire trip, we had a great time! Here is the picture of the 4 of us by the pool (where we spent most of our days!). 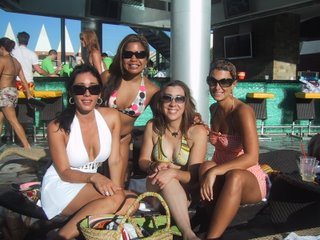 Eva, Wendy and I all went to grade school together- believe it or not! Wendy and I actually met in Kindergarten and Eva came to St. John's when we were in the 6th grade. Its crazy to think that we have known each other for that long and it was so fun reminiscing about old times- and we seemed to do that the entire time! Poor Vanessa had to hear story after story... and there were some pretty good stories. 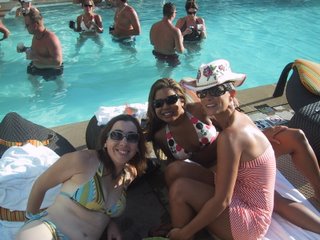 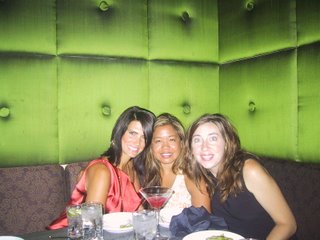 So the time I was in Vegas and could actually function, I had a pretty good time. We had an awesome meal at this place called Tao in the Venetian Hotel. We had some delicious sushi and great martinis! Definitely a must-eat place. Later that night, we went to "Light"- the club at the Bellagio Hotel and we were so Vegas and it was so funny. We got there and there were a ton of people waiting to go in, but party girl Vanessa got us on the list and we walked right in. I haven't even done that in LA! Here are some pics of us from that night.... I love the one that Eva took of all of us in the elevator! 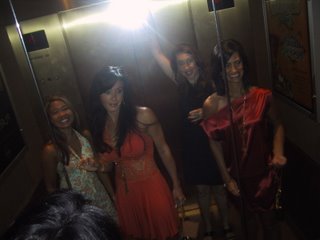 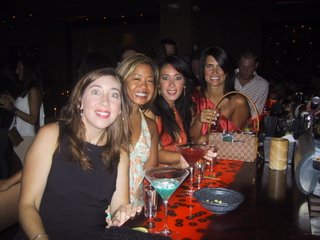 The next night, I was feeling worse- I think I over did it the night before... so I stayed in while the girls went to dinner. It felt so good just to rest and watch TV. Although it was probably worse because Dateline NBC came on and it was a Hurricane Katrina special and it was hard to watch alone. My phone rang and my friend Krista (from NOLA.com) just so happened to be in Vegas and was at the House of Blues (in Mandalay Bay!). So instead of staying in alone, I ended up rallying and getting up and dressed and jumped in a taxi headed to HOB Foundation Room. We had a drink, caught up and I headed back to the Palms and called it a night. My big one hour out of the hotel that night- but Krista was well worth getting up!

We got up early to all drive back to Los Angeles... it was a quick drive back! Thanks sooo much Eva for driving us. Can't wait for our next trip, hopefully this time I will feel much better!
Posted by rizanola at 5:37 PM