In Portland visiting Johanna and Geoff

Its been 8 years since I've seen Johanna and Geoff (pronounced Jeff, although I like to call him Gee-off) and when I saw them it was like we never missed a beat. We immediately started to reminisce about old times and we figured I've only met Geoff about 4 times (in the last 11 years they have been together) but I felt just as close to him as I did my great friend Johanna, who I went to college with and who was my room mate sophomore year at Loyola. 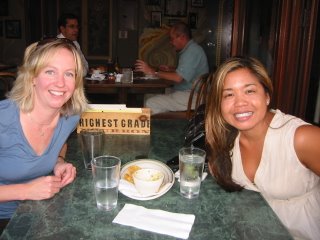 I ended up having many pleasant surprises during my stay in Portland but let me first start off by telling you the real reason I was there- for work. Portland will be one of my markets that I will handle for IB and the station there is the FOX affiliate. My direct contact will be Kelly Martin and turns out that Kelly and I used to work for the same company, Advance Internet, except I worked for NOLA.com and she worked for Oregonlive.com- small world. My boss Dave flew in from Minneapolis and we had a productive meeting at the station and a really good client call. So after our appointments, we went to the Paragon for some after work drinks and happy hour on Friday. Rose also happened to be in the Portland area visiting a friend so she met up with us as well.

Johanna and Geoff did a great job of showing me around Portland, taking me to Hawthorne street (my first day there) and some really cool places around their quaint neighborhood. I love where they live, there are so many cute places to go in walking distance, friendly neighbors and lots of greenery. Here is the house that they bought 6 years ago and have fixed up (they did most of the work themselves!) and its just beautiful on the inside and out. They even have a wine cellar in the basement and that's also where Geoff makes his beer -- from scratch!

On Saturday, they took us to the Stormy Morning Winery which took about 30 minutes to get to and the ride out was incredibly scenic. 7 of us picked over 1,100 pounds of grapes / 40+ five gallon buckets full in less than 3 hours! Here is a picture of us before we started picking- From left to right its Sydney and Paige, Pat, me, Tom, Johanna, Rose, Stephan (their friend from Jackson Hole and he was going to run the Portland marathan the next day!), Bill (owner of the winery) and in the front, my buddy- Geoff. 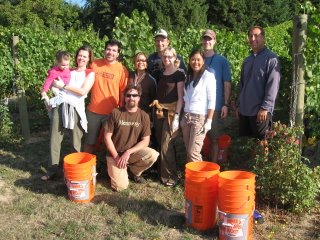 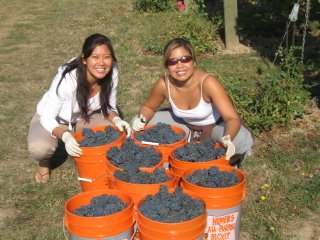 Geoff made sure to keep us focused and in-line! Afterwards, they had a bbq and a spread of food. The weather was just perfect so we spent all afternoon at the winery and thought we were only going to be there for a few hours and ended up there for much longer. The only downfall was the yellow jackets- they were out in full force and only one of us got stung and it wasn't too bad- but they love those grapes.

During the processing part- when we would stick the grapes in the machine to lightly crush and de-stem- that is when those yellow jackets were the worst. There are wayyyy too many pictures to post here,so you can click here for more pictures to be uploaded on flickr soon!

I also want to give a shout out to my friend Diane Penny, who I met for dinner on Saturday night. Her and I worked together for 3 years when I worked for Advance Internet/NOLA.com and she worked for Oregonlive. It was crazy talking to someone on the phone for all this time and never knowing what they looked like. It was great to meet her and looking forward to many more drinks since I will be coming to Portland often! Cheers Diane!
Posted by rizanola at 4:03 PM