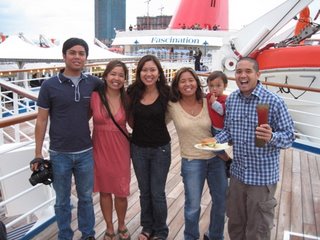 Well the excitement started right as we opened our eyes and started getting ready to leave for Miami to board our ship. We kept reminding each other "don't forget this" and "don't forget that" when Rose reminded me of something very important that I forgot... my passport. I know, the one thing that was bolded and highlighted in all e mails and the one thing we kept talking about the entire time leading up to this day. So I rush downstairs to tell my mom and my sister Rachelle who set everything up and I think at first they thought I was kidding. Then Ron overhears me and says "I forgot my passport too!"

The fun was just beginning.... ok, not really. Ron and I were both on phones and computers trying to get in touch with someone at the cruise or the passport office in Miami, hoping that maybe we could get a quick passport when we got there before getting on the boat. Yeah, right. So finally we all just got in the car and started our 3 hour trip to Miami and continued the phone calls and comp work in the van (thank god for broadband cards).

I can tell you the entire 3 hours Ron and I were trying to figure out how we were going to get our passports since all the paperwork and documents clearly state: Passport required to board, no exceptions. But to make a long story short.... we finally came to this plan: Have my friend Vanessa in L.A. get our passports (and we had to call a locksmith to get into my place), then take it down to the Delta terminal and have them fly our passports to Miami which we would pick up at midnight that night. Then we would get a hotel room at the airport hotel, stay the night and fly out on the earliest flight we could to Nassau and meet everyone there. Believe it or not- the plan was in place and we were ready to have to spend all this money to meet everyone for just part of the cruise.... however--- we get to the cruise terminal and all they made us do was sign a piece of paper stating that we didn't have our passports and then let us on! 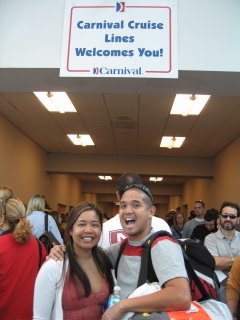 We were so relieved that we could be with everyone so all of this stressing for the last 5 hours ended up being for nothing! We were just so happy to be on the boat and get settled in our rooms which were bigger than we thought they were going to be. Here is a picture of our room and the 2 beds on the top fold down into the wall. Me, Rose, Ron and Roger shared this room and if you look closely, you can see the towel they folded into a pig and would have a new animal in our room everyday. I was really surprised about how roomy these cabins were! 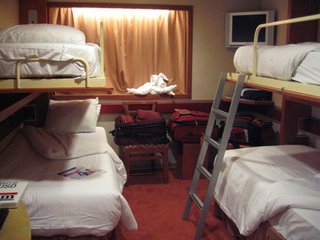 After we dropped off our luggage we had to do a safety drill using the life vests and that lasted for all of 20 minutes and we were finally able to relax, dance to some cheesy music they were playing on the Lido deck and have some dinner in the Sensation dining room and drinks! The boat was really nice and had several pools, a volleyball court, a basketball court, a casino, shops, a large theatre for shows and very LARGE buffets everywhere, 24/7. Ouch. That should be illegal. Especially the midnight Mexican buffet on Saturday night. 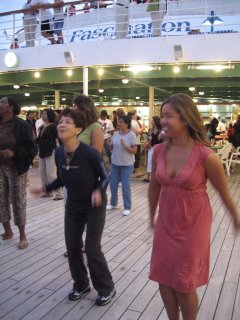 After dinner (4 courses that felt like 14), Rose, Roger and I went to see the live "broadway" show that was playing in the Palace Theatre that had some latino theme. It was very interesting to say the least. The dancers were very animated, but not so "broadway" and the singers seemed out of tune more often than not (especially the chick who looked like a man). It was entertaining though (and did I mention free?) and we came back the next night for more- but this time it was an 80s theme.

By the end of the night.... we were exhausted. Up at 6am, a 3-hour drive to Miami, a stressful morning, waiting in line after line checking in, getting settled on the boat and in our rooms and as always- eating until we couldn't move. But all in all, our family was together and that's what mattered. This was a great way to spend the Thanksgiving holiday and we have our mother to thank for that (it was her idea!). We can't complain- cruising to the Bahamas in November... not too shabby.
Posted by rizanola at 5:02 PM

Can't believe you and Ron both forgot your passports! Thank goodness both you hoodlums were able to get on the ship; otherwise, that would have been an expensive fiasco...and it wouldn't have been the same without y'all.