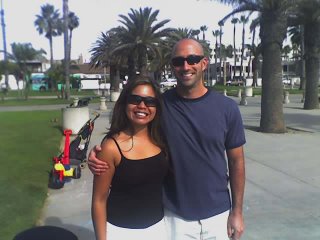 I just wanted to give a shout out to my friend Mike, who was one of the first few friends I made when I got to LA. Its interesting the people that come in and out of your life, but I am really glad that Mike and I crossed paths. He lives out in Venice Beach where I live, so its been nice having a "neighbor" in the area.... and someone who I can mooch some wireless signals from since I didn't have internet until last week. He's my "411" to places to go around the hood and once I get a bike, I'll be joining him on Friday, Saturday, or Sunday mornings at one of the many awesome farmer's markets in the area. 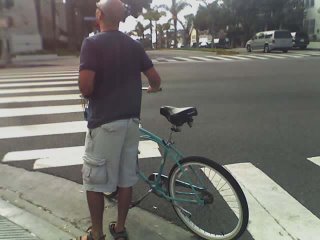 Just recently, Mike lost his father to lung cancer. He was diagnosed a few weeks ago and the docs gave him 6 months to live. Mike called to tell me he was going to go see his dad and hang out with his family for about a week. On his way back to LA, he got the call from his mother that his father had passed. I just want him to know that he is always in my prayers and that even though we have only known each other for a couple of months, I consider him a very good friend of mine.

I just share this story because it's amazing how things can change so much, so fast and in me and Mike's case, our lives have both changed in just a couple of months. When I first got here, I was living on my brother's couch, jobless and having no direction in my life. Thanks to people like Mike that helped me even a bit- directions somewhere, traffic advice, even using your internet... because without friends like that, I would not have been strong enough to adjust to life as it was (and still is actually). Now that I can stand somewhat on two feet, I just want you to know that now I can now be strong for you and if there is anything you need me to do, just call my name and I'll be there (are those lyrics to a song?). Ok seriously, that goes out to all my friends that need just a little extra love and attention right now. Who am I kidding? We all need it all the time. 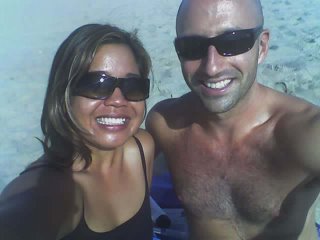 Here is a picture of us at Santa Monica beach after we spent the day at the farmer's market on Main street in Santa Monica earlier that day and had a nice brunch. The picture above is also from the beach... it was a nice day with good food, good shopping, good weather and good company.
Posted by rizanola at 8:03 PM