A Sunday on the west side 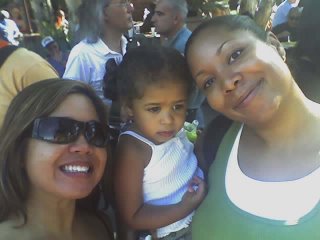 I am currently on the plane going from Nashville to San Diego but I thought I would write down some thoughts. This past Sunday morning, I met up with some friends at the farmer's market on Main street in Santa Monica-- my first farmer's market experience out here. I thought I would blog about it because its just unbelievable the "scene" at these markets... and they offer more than just food. 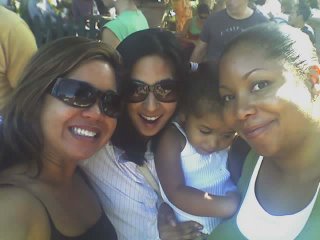 Vanessa and her daughter Norah, my friends Aarti and Pervesh and their daughter Nikita and my friend Mike and I headed to the farmer's market to shop around and then get some brunch. When we got there late morning, the place was packed! We just went through a cold spell (you know, in the 70's) but that day, it had warmed up to about 90 degrees! People were fighting for patches of shade and standing under tents to eat their food and avoid the sun. It was a beautiful day nonetheless and it showed in the amount of people that were out that day.

Much to my surprise, this farmer's market not only had your typical produce stands, but they had lots of different food booths-- and not elephant ears or bags of peanuts-- but booths that served full on omlettes made to order and crepes made the same way. The lines were really long so we decided to send Pervesh down the street to a nice little brunch place to put our names on a waiting list while we enjoyed more of the market. In the front were pony rides for kids (yes. real live ponies) and also set up in the middle of the market was a stage for music and people dancing all around. But it wasn't just any kind of music- it was a brass band!!! It was so refreshing to hear the sounds of New Orleans, seeing people of all ages and races dance around and there were people even wearing the "re-new orleans" shirts. If you closed your eyes and listened to the band, it was just like I was back in the Big Easy. However when you opened your eyes to look at the band-- there was one thing that wasn't quite so right... the players were white!

After we left, we went to get some brunch and all got our fill! It was great food and the atmosphere rocked- we got patio seating and it was just awesome being outside on a Sunday morning. 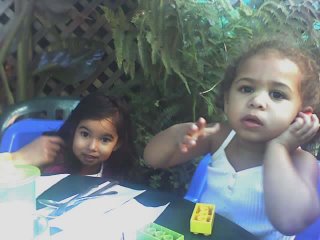 After we ate, we walked down to the beach which was all of two blocks away and played in the sand, walked down to the beach and soaked up some rays. As we were ready to leave, Mike and I decided to walk home.... which may seem like a long way- but time went by so fast as I was in good company. We took Main Street all the way to Abbott Kinney and stopped along the way to look in shops (I loved that groovy Hawaiian furniture place!) eat some gelato and peruse the nursery for some new plants! Ahhh..... you have to love Sundays on the west side.
Posted by rizanola at 10:52 AM