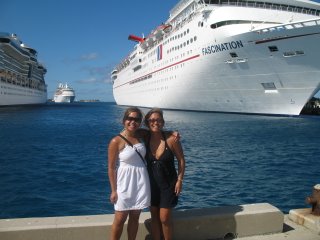 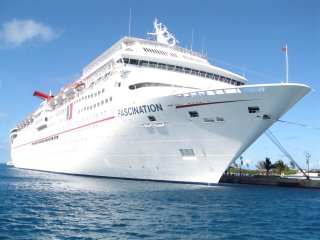 Ok- I know I have been slow to posting, but after I left the Bahamas, we spent the day in Miami, then overnight in Melbourne Beach and then flew straight to Vegas for meetings and it was in the 30s there! I finally got back to LA after about 2 weeks being on the road and with all the weather changes and time zone changes, I was worn out. I was starting to feel sick so I have been spending a lot of time recouping. Anyways, I am back with more. 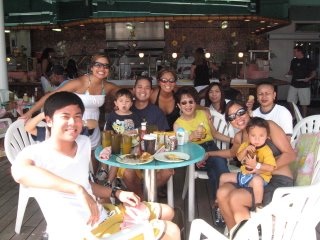 We opened our eyes this day only to find that we were docked in Nassau, Bahamas! Because of all the commotion the day before, we got a little bit of a late start- not to mention eating a 2-hour breakfast, which was easy to do. We finally got our group together and made it off the boat and on the island! We had no idea what we were going to do since it was too late to sign up for any island excursions so we met a guy named Cliff who was with some tour company (or was he?) and he suckered us into doing an island tour with him. Our time was short so we caved in and said yes. 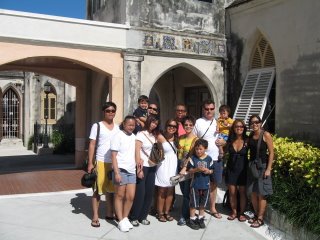 He took us around and pointed out some historic sites of the downtown area of Nassau, took us to some markets and then we went to Atlantis. This place was amazing and although we didn't do the full on tour of the Aquarium in the Atlantis, we did get to see this huge tank where you could see spotted eagle rays and mantas! Huge ones!!! Not to mention all kinds of other fish- wide-eyed jacks, triggers, tuna, etc... It was a site, I can only imagine what the Aquarium actually looked like which was located right below the main lobby of the hotel. This hotel ranges from $300 a night to $25K a night and lots of stars and celebrities stay here. The art and design inside was absolutely amazing. 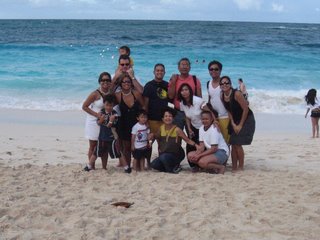 It was fun being on the island and although I have been to the Abacos Islands in the Bahamas, this was my first time in Nassau. I wish we had more time in port and I also wish I could of had time to do some diving! We were able to shop at the markets in the "downtown" area of Nassau to get some little gifts and also Cliff took us to another place where he had friends who owned some craft booths. 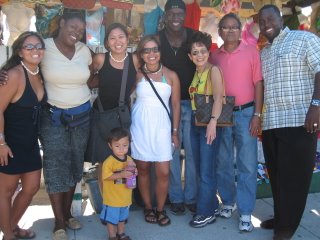 We had to hurry back to the boat because it was "formal" night this night for dinner and since we were running late, we missed the "drink with the captain". We got back and we all got dressed up and again, had a 4 course meal and ate until we couldn't anymore! My favorite was this dessert they called the melting chocolate cake that was served hot with vanilla ice cream-- delicious! 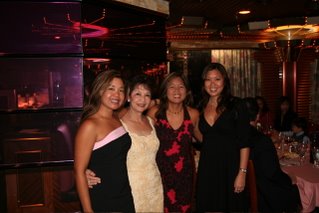 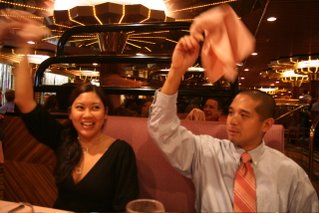 After dinner, we hit "Putting on the Ritz" karayoke bar and it was so hilarious! There were a bunch of people already in line to sing and it was funny how serious all the singers were! Rose, Merian and Ron signed up to sing and we were laughing so much my stomach was hurting! Rose sang "La Islan Bonita" by Madonna and they had a box of "props" you could use so she grabbed this drum that hung around her neck! She showed off her talent by holding the mic in one hand, banging on the drum every now and then and holding and never spilling her drink! I mean, her singing was good- but that was the most impressive part. We all stood up and danced and had a great time!

Merian sang "Just Once" and she did an awesome job! She got the crowd going and people in the audience had their lighters out and their hands up swaying from side to side!

Ron was the last to sing and he sang a Michael Jackson song, "Rock with You" and he did an awesome job seeing how the display wouldn't work so he couldn't see any of the words to the song and had to do it off memory. He rocked it though and the moonwalk move was the best! He was a hit and we all got up and danced!

After we made fools of ourselves at the karayoke place, we decided to check out the mid-night buffet. Ok, so we did end up eating but it was amazing how packed the place got! It felt like it was lunch time seeing how big the crowds were. Just a tip if you were ever to go on a cruise: avoid the mid-night buffets and understand that just because there is food around, you don't have to eat it. We learned that on about the last day of the trip!
Posted by rizanola at 11:04 AM

Riz-Nice blogging. Looking back on our Thanksgiving holiday reminds me of "National Lampoon's Family Vacation!" ha!ha! Yes, with all the commotion, we could have made a movie out of it!

OMG the chocolate melting cake- such a fond memory! And Ron's dance stylings during the karaoke sessions- god we were shameless ;)

Hey,nice blog!!! I found a place where you can make an extra $800 or more a month. I do it part time and make a lot more than that. It is definitely worth a visit! You can do it in your spare time and make good cash. Make Extra Cash