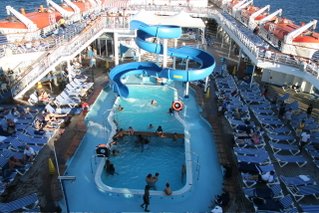 We finally left the dock at around 8AM the next morning. Rachelle and I went for a run around the upper deck and as we were running, I started to feel nauseated and it was because the boat started to move! We were "sea-locked" all day this day so we did the only thing you could do ... nothing. It was really nice to get up, eat a big breakfast and then hang by the pool, wander around the ship, etc..

They did have these cruise activities all over the boat that were so stupid that you just had to watch them. One was the hairiest guy competition (and they had like 10 guys volunteer to do it.... yikes) and the other was an ice sculpting contest. 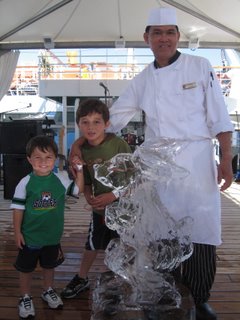 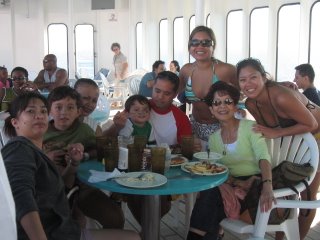 We did this pretty much over and over all day until the girls got ready to get our massages and facials and that was a lot of fun! The boys hung out on the putting green or by the pool waiting for us to finish and then off to our dinner all together... in the same place as the nights before, same waiters, etc.... 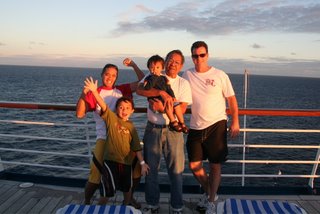 Since we had all day to hang out, I finally explored other areas of the ship because we always just went to the Lido deck and stuck around there pretty much the whole time. I ended up finding a topless deck on the other side, not to mention a full on volleyball court, basketball court (all surrounded by nets so the ball doesn't fly off the deck and in the water) and like 5 other pools! I wish we had more time to spend on the ship... actually, no I don't. Anymore time on that ship and I would have to enroll in a Weight Watchers program.

We all got together for dinner once again and this night, we celebrated all the November Birthdays-- and there were a lot of them. Me, Rose, Dan, Cale and Lucas! They got a cake for us and sang happy birthday.... so sweet. 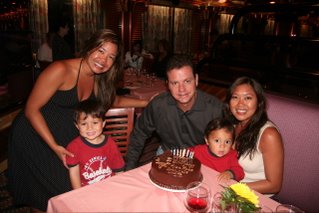 After dinner, we ventured out to the Palace Theatre (where we saw the shows the night before) and tonight was an 80's version of what they did 2 nights ago. It was like a tribute to the music of the 80s-- they sang and danced to Michael Jackson's Thriller, Pat Benetar, Madonna (and all versions of Madonna came out actually, pretty cool), etc... After the show, some people hit their rooms and the others stayed up to play some "bingo"- ok, that's all there was to do before the comedian started- and then the comedian came on after that. 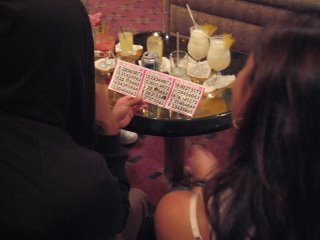 The next day, we just packed and had to be off the boat by about 10am. After we "de-shipped", we spent the day in Miami on South Beach, had lunch and walked around. The weather was a little overcast and it even rained a bit, but we had a good time. Here is a picture of us on the beach. We finally left around 5ish since we still had a 3 hour drive back to Melbourne Beach! We had a great time but I was exhausted and had an early flight to Las Vegas to look forward to the next morning! My, how fast our time on the cruise went by.... Thanks Mom for setting all this up for us! We should do something like this every year!!!! 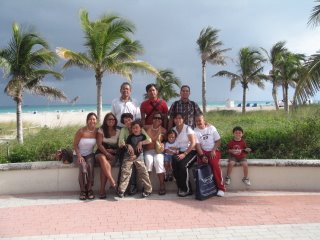