A night at Pershing Square 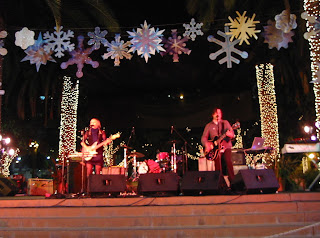 Last Thursday night, Ron called me to see if I wanted to go down to Pershing Square to go see The Submarines Play, a husband and wife team and the woman, Blake, actually went to high school with Emma (Ron's girlfriend for those of you that don't know). Anyway, I was reluctant to go because I knew it was downtown and I am all the way on the beach so I knew it would take me at least a 1/2 hour or longer to get there. My buddy JD and I had planned on eating dinner together that night but I called him and he was game for anything so we headed downtown to go see them play. I love live music and its been a long while since I was able to soak it in. 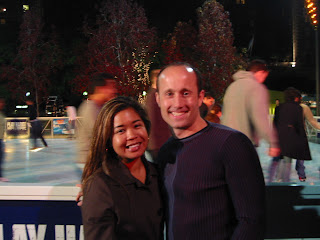 We headed downtown (thanks for driving JD!) and to my surprise, they were playing outside, on a beautiful stage right in front of an ice skating rink! It was the most gorgeous scene and for the first time all season, it really felt like Christmas (without the snow and freezing cold of course!). The weather was perfect... a bit chilly but nice to hang out and there were a ton of people out! They had some food booths around the rink that had your staples, you know... hotdogs, nachos, hot chocolate and more! The band was great and it was the first time I had seen them play... Blake was so fun to watch and I love how she talks to the crowd in between songs. It was a really good time and afterwards, The Great Northern played which sounds a lot like The Submarines.