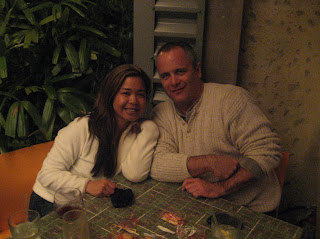 Last Sunday, my friend CP came to visit me here in LA! Ok, so he wasn't just here to visit me- he was doing some tests for Scuba Labs up in Ventura and also his son goes to USC here! He stayed with me for the week and we had the best time... the last time we saw each other was when we were in the Galapagos together last summer- but it seems like years ago when we took that trip. I guess so much has happened since then.

It was so much fun having him as my guest and showing him at least what I know of LA. The day he arrived we decided to go check out the Santa Monica Pier and when we got there, we stumbled upon a memorial for all the soldiers that died in Iraq and they put crosses all along the sand, in perfect lines, to represent each one. It was really moving and something just comes over you as you look out on the crosses stuck in the sand from the water to the strand. Some crosses had pictures of soldiers next to it and bunches of flowers in memory of. It was right around sunset when we walked up and it was a perfect sunset. 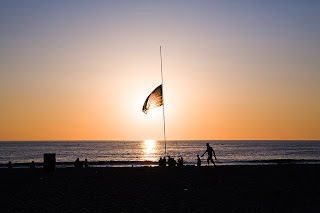 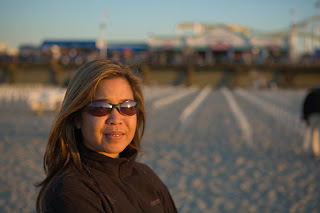 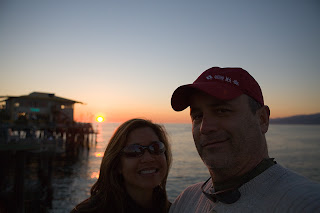 We also rode bikes together throughout Venice Beach and rode down to Santa Monica and ate lunch on the beach as well. It was such a fun day and we even went for a nice run on the beach (literally.. it was brutal!) and of course, the day this day was perfect- which I can't say about all his days here. It just so happened that part of the time he was here, it was so cold here we broke all kinds of records and it even snowed up in Malibu which is the first time it has snowed there in 40 years! But a little snow didn't get us down and later in the week- the sun came out and made it up to us. I must say we had some very nice days on the beach. 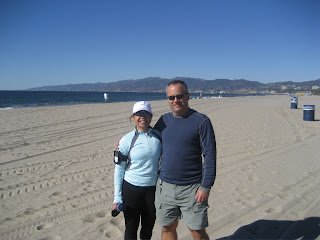 He also got to see Ron one night when we went to this incredible Thai restaurant called Natalee Thai- there are a few locations here in Los Angeles but its the best .. and reasonably priced! 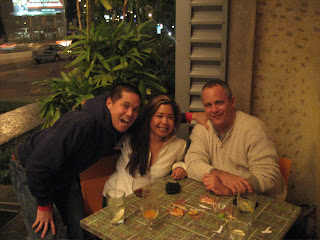 Well, the weather cooperated the second half of the week and the day he left- the weather was perfect. I know, just in time for him to go. I do want to say that the time I most enjoyed together was when we played guitar for each other one night- well, lots of nights. I would play a song and CP would play a song- it was sooo much fun and CP is really great on the guitar! I need to keep practicing and getting my bar chords down! 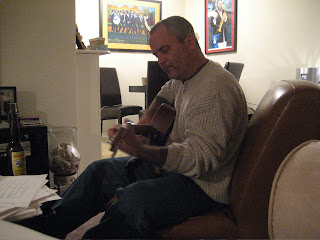 There were so many great times with CP, too many to blog, but I will have to post about my past weekend... and that is to come soon!
Posted by rizanola at 6:26 PM