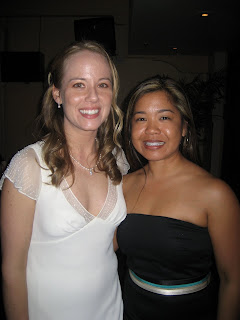 I just got back from my good girlfriend's wedding in San Antonio- Becca and her new husband Chris! I've heard so much about Chris for almost 2 years and have never met him, so I was really excited to get to meet him.

I flew into Austin and CP picked me up from the airport... I felt horrible because my flight was almost 2 hours delayed! But I finally got there around 1am and we headed to CP's house to crash out and then get up early in the AM to head to San Antonio. The wedding was for 11am and we actually got there early so we rode around the Air Force Base to check things out and then to the church. 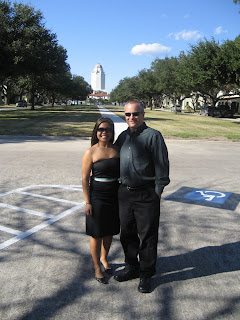 The wedding was perfect. Becca's entire family who was present (her brother Austin is in Iraq) took part in the Wedding and were in charge of all the music. Her younger sister Claire and older brother Joe both played the piano and her parents sang. They even played a song that her brother Austin sang that was recorded when he was with the Ohio State Glee Club. Then Becca sang a song to Chris and it was so touching it made me cry. It was a beautiful ceremony.

Afterwards we headed to the reception at the Officer's Club where I got to finally catch up with my old girlfriends from Loyola! Here is a picture of Laura, me, Becca, Heather and Angela- all graduated from Loyola and its been a while since we have all seen each other, especially since Katrina because that was the one place that we would see each other. 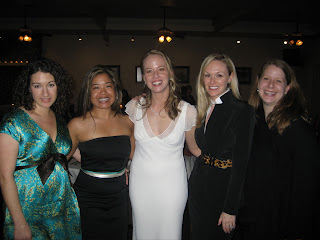 Laura and John are now in Chicago and its nice because there are a ton of New Orleanians there in the area. It was nice to see Heather and her husband who now live in Galveston---I forgot how hilarious these girls were! They had me rolling all night... Angela and Rick were there with their daughter Isabella and Angela just announced that she is pregnant again! Congratulations to the both of them! It was also nice to see Julie who I have met once or twice in Atlanta actually who is a total sweetheart! 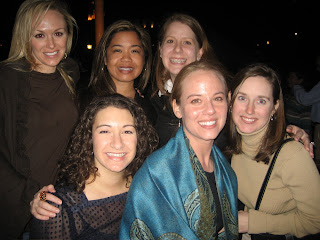 After the wedding, we headed towards the River Walk where Becca reserved a couple of riverboats for the wedding party to party on the boat and have some food and drinks! It was a blast and was a great thing to do on my first trip to San Antonio- I couldn't have asked for a better way to see the city. 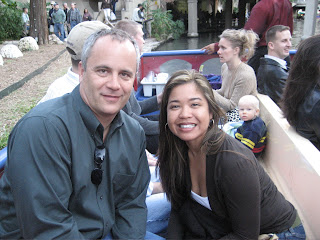 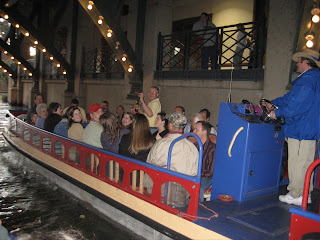 And sadly, after the riverboat cruise was over, some of us continued the party on the River Walk for a few more hours until we retired. It was such a happy time to see all these old friends from New Orleans but also so sad that we were all so far from each other now and spread out all over the country. 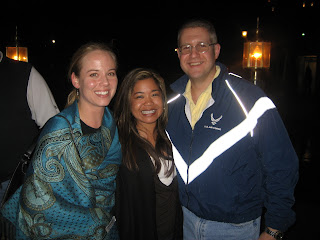 Congratulations to Becca and Chris! Your wedding weekend was a blast and thank you for making me a part of it. I hope to see you guys again very soon and hopefully Becca, you can come out here and stay with me in Cali for a weekend... I would love that!
Posted by rizanola at 10:44 AM