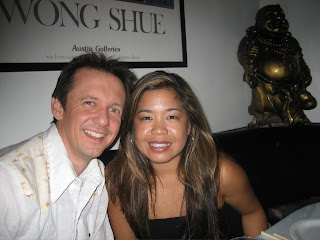 Ghengis Cohen is located on FairFax near Santa Monica Blvd and not only has a cool restaurant where you can enjoy gourmet New York-style Szechuan Chinese cuisine (very delicious!) but has a cool little room in the back where they have bands/artists/stand-up comics come do their thing. Just recently, my friend Cory not only did improv, but the same night his band performed as well!

A group of us went to enjoy the gourmet Szechuan cuisine before the show but the service was a bit slow so Cory just had a few bites and had to get ready to go. Here are some pictures of Vanessa and Josh, then Yung, Josh and myself and Mike and Christine at dinner.

After dinner, we headed to go see Cory and friends do Improv which was hysterical! My favorite was when Cory was being "interviewed" by this other comic and another guy had to translate their whole conversation for deaf people. Here are some pics and I will have to post a video soon because it was too funny!

After Improv, the band came on and they rocked as always! Cory's voice is awesome and the band is just so much fun to watch. Again, we had a great time - everyone had so much fun! Their next performance will be at O'Brien's Pub in Santa Monica next Thursday! If you are here in LA, come join us! 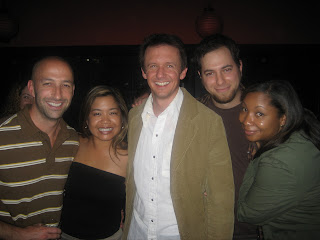