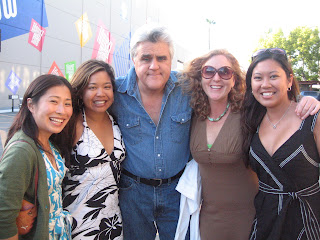 Here is the picture of us (Helen, Maribeth, Rose and I) hanging out with Jay Leno after the taping of the Tonight Show last Friday Night.. you know, because that's how we roll! Ok, so we didn't actually hang out with him- we just got meet him for all of 5 seconds-- but it just sounds better to say we were "hanging out" with him! Ha... anyway- come to LA and you could get the Super Duper VIP treatment that we did!!! My contact Aziz over at NBC hooked us up with a studio tour and here is a picture of us below. 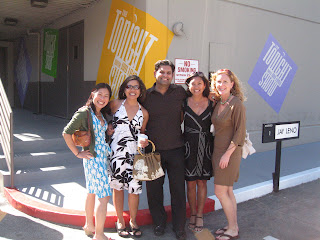 I also got to get on stage during the taping- although I didn't actually get "on the show". Man, I can really make a story sound AWESOME, right? They actually made me dance for like 15 seconds, which felt like an hour, by myself in front of the whole studio audience (ok, so there was like 50 people in the crowd-- but there might as well have been 500!) and all I got was a Jay leno hat! They picked 10 people in the audience to make complete fools of themselves in front of everyone before the show and of course, I had to get on stage! Before the show, we met the security guys Andy and Tony and one of them saw me when they asked for people to come up and he picked me to come down! I am sooo stupid!!!! After the show, they took us back stage to where Jay was going to come out and we got to meet him. 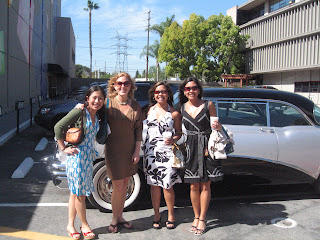 Here is a picture in front of Ellen's studio where they do the taping for her and a picture of Jay's car that he drove that day because I think he has 20 different cars (or maybe more!). Just wanted to post a few pictures but check out my flickr account soon because I will be posting more. I will also post some other pictures from the really, really long weekend this past weekend with everyone in town from Helen's Bachelorette party!
Posted by rizanola at 12:25 AM

Thanks for sharing your blog with me. Looks like fun, I would come visit you in LA anyday....

Wait a minute. I live in LA but you seem to do much more than me.

I agree with you, ever since I stared following this blog, I seem to know more about what's going on in the LA area than in my own city of Montreal...

I've always admired Jay Leno, he always had that laid back attitude, even before he got the nod to replace Johnny C. When you watch him do his Jaywalking segments, you can tell the pleasure he gets from meeting regular folks is genuine. Kudos to a class act!!!

You know how to roll. Too bad it wasn't Letterman. Come to NYC the next 2 weeks and see.
TIM