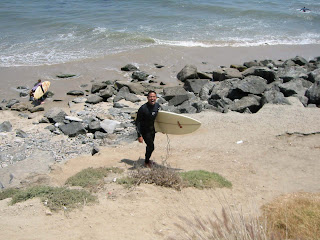 Man, I know its been a while since I've blogged... things have been a bit hectic. I have been doing a lot of traveling and in the next couple of weeks I hope to update my blog with some fun past times, but for now I just wanted to post some pictures of us surfing a couple of weeks back. 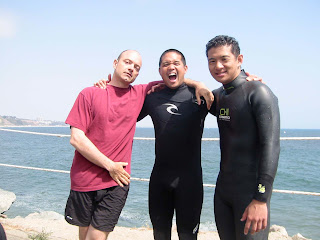 We went to Will Rogers State Park in Malibu, a couple of miles north of the Santa Monica Pier. Its a nice place to go since the waves tend to be smaller there and it's where a lot of beginner surfers go to learn. Ron, Ly, Eric and I went up one weekend and Ron showed us the ropes... it was Eric's very first time and he did great! I have only been a couple of times before but it felt like the first time since its been about a year since I've been on a board.

The water was a bit chilly... but we were in the water for almost 3 hours so it wasn't too bad! We also met some other beginners- Geeda and Brandon and we are looking forward to surfing with those guys next weekend! I just got a new wetsuit (the f-bomb series from Rip Curl- its wayyy comfy and will totally keep you warm... you could definitely surf in this one all year round). I'll hopefully get a surfboard soon... I'm hooked! 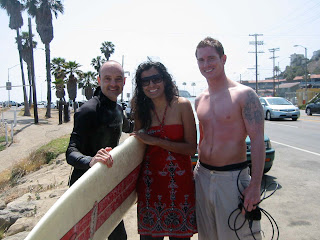 Nice, it's been forever since I've (attempted) surfing! That pic at the top is quintessential Ron.