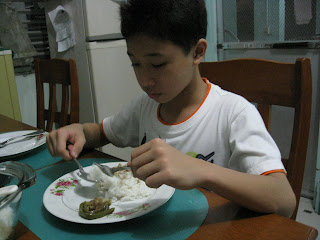 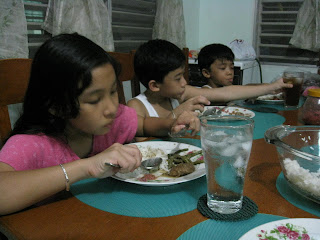 Ok, so I am waiting for everyone to finish getting ready to leave for the airport- we will be in Cebu by 1:30pm (Only an hour and a half flight and we leave at noon from the Clark airport)!!! Yea!!! It's only 10am right now so I decided to post a little something.

So, my cousin Winnie last night was telling me about how her office does "Feng Shui" and once a year, they invite a Feng Shui expert to come to the office and he burns piles of coals throughout the office and says some prayers to ward away the evil spirits. According to this expert, there were 10,000 bad evil spirits lingering... I can't believe he could count them all. Actually, a few years ago- to ward off the evil spirits they would sacrifice chickens and put their blood everywhere but the expert said that what that actually did was invite the evil spirits in the office. Interesting, huh?

Anyway- my point to that story was that my cousin was outside during all of this and got bit by a bug of some sort and apparently, she is really allergic because it got so swollen that it was almost the size of the top of her hand. But to make it better- she put Vick's on it= (the vapor rub stuff). Not sure how many of you have seen the happyslip.com videos, but there is a joke in there about how Filipino's use Vicks as a cure-all to any problem you may have- and they pronounce it- "Bicks."

Ok- so the other thing is... I can't eat any more rice! I feel like I've eaten so much that I am just swollen everywhere. I feel so bloated! They eat rice with everything- even with their burger from Jollibee (the local Burger King). They serve rice in ALL food places, its hilarious! If you want pizza... you can get that with rice!

That's it for now.. will blog more later! Hope everyone is doing well...Oh- the pictures above are of my cute niece and nephews- Kayla, Carl, Curt and Clyde! 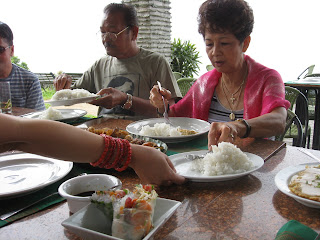 Good fill someone in on and this mail helped me alot in my college assignement. Say thank you you as your information.