We arrived in Cebu in the early afternoon on the 25th and it was a smooth hour and a half flight and it was so cool to look down and see all the different islands that make up the Philippines. We took a 20 minute van ride to the hotel and got the royal treatment when we checked in! Here is a picture of us in the lobby of the hotel and again in the lounge on the 21st floor where we stayed.

We hung out in the lounge for a while and then left to go meet Cecilia and her family including her Uncle Demie and Auntie Perla at the Lapu-Lapu shrine that was only a 10 minute walk away. We walked along the road to check out the local scene and there were some adorable kids following us and they loved to get their picture taken. 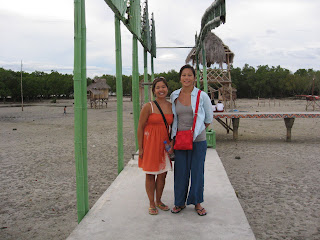 We made it to the shrine and walked out on the pier to find that the lake dried all up because the tide went out- it was low tide. Everyday in the late afternoon, the tide goes out and you can see all the boats docked close by sitting on the bottom of the ocean floor. We took some pictures there and then headed into the little market right next door to go to Sutukil (stands for sumba tulu kilaw- basically means you can have it any way you want it). 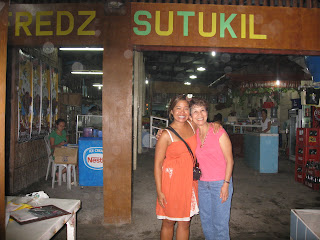 Its a seafood restaurant where they lay out all the seafood you can choose from and you pick out what you want and then they cook it for you. Since this was our first time, Uncle Demie showed us what was good and how much to pick out- although you know that its always much more than we need. They had everything you could imagine, and some you probably couldn't imagine- like parrot fish. Do people actually eat parrot fish? I guess they do here! They also had crabs, shrimp, lobster, squid, etc..- you name it… and everything was huge! 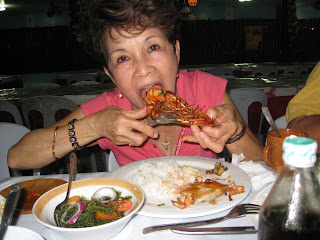 We ate next to the original "No Problem Restaurant" that was the oldest one there, now there are a bunch of new ones- and all of them were pretty much on the water and open-air. It was pretty hot, but the table that we had had a fan and we were getting some breeze off the water. There wasn't too many people there because it is considered low season right now here in the Philippines since its rainy season. (It did rain a little bit each day, but usually the showers were over in 10 minutes, literally.)

There was a total of 11 of us and the whole bill came to a little over 7000 pesos or PHP which comes to about $180 dollars basically, or roughly 15 bucks a person. Pretty good for all you can eat, plus drinks for 11 people! We even took some left overs home. 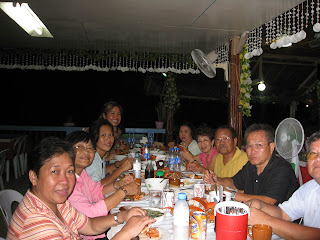 We finished around 9:30pm and retired to the hotel. We were sooo exhausted from the day. Cecilia and I stayed in one room and everybody else stayed in the other room. The views from the room were spectacular, especially in the morning when the sun rises and at night to watch the sun set. You can see all of Mactan Island from the balcony and we were surrounded by water. It was neat to watch the tide go out at night and watch the boats slowly be placed right on the bottom of the ocean floor.