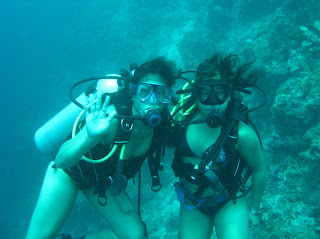 This morning we woke up at 6:30am and I went for a quick run in the gym which was really nice and I am so glad that I got some sort of exercise in. They had a full breakfast buffet and right after we walked over to Scuba World to check in for our dives. This shop was "affiliated" with the hotel and was right next door so we just walked on over. We met Mikey (dive master), Paul (dive master), Jordan (Fleet Manager), Dindo (Dive master), Tony (worked in the shop) and Amado (Store owner or manager?). They were all really nice and helpful and we had a great time hanging out with everyone in between dives. 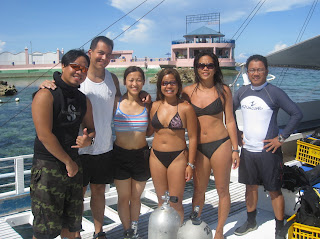 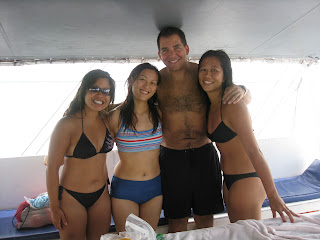 We met Bill (originally from NJ) and Suki (Hong Kong) who were a couple living in Hong Kong currently and were so nice. We did both dives with them and will hopefully keep in touch with these two and visit Hong Kong one of these days! Or maybe if Bill and Suki comes to the states, they can come visit in California. It was very nice to meet these two and if you are reading this... Cecilia and I had fun with you guys and the pictures are coming soon I promise!

The first dive was Naluswan Island-- 80 ft. dive and it was a beautiful dive. Right when we got in, we saw baracuda and a bunch of trigger fish, clown fish and a ton of cool tropicals that I don't know the names of.

There were some very unusual looking fish that I have to look up before I blog about them. One thing that totally startled us while we were diving were the sounds of bombs going off in the distance (we were told about 20 km away) but it felt as though they were right next to us. This happened to us in Boracay as well and its so sad that it is still happening- but the fisherman bomb the reefs to catch the fish. In the PI (Philippines), they can't troll the waters for fish because of the reefs so then they bomb the reefs and the dead fish will float to the top and the fisherman will gather the fish that way. And I did say bombS because this happened 3 times while we were under water. That's no joke. By the 3rd one, I looked over at Cecilia and she made fists and hit an imaginary wall under the water. I totally felt her frustration... I wanted to find those fisherman and hit them over the head. Below is a picture of a nice, pretty, healthy reef and some other cool coral and starfish.

We stayed down for about 45 minutes and then had a one hour surface interval so we headed to the next dive site... Hilotongan Island- a 60 ft, dive. But since we had some time to kill, we played around in the water and snorkled around since the water was as clear as a swimming pool. 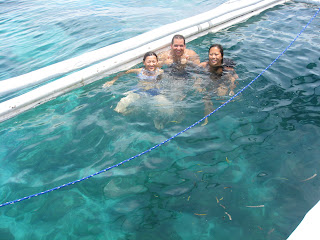 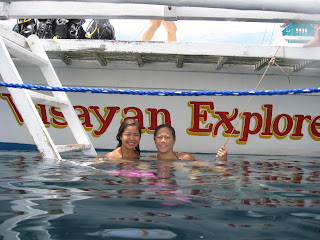 The time passed pretty quickly though and we geared up for this next dive and got in the water in no time. Again, another beautiful dive. 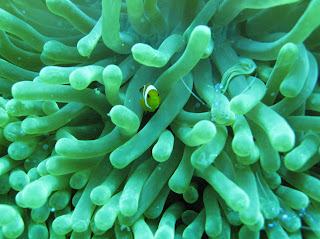 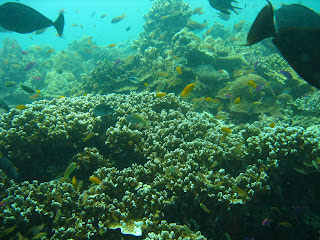 This time, the dive masters took down some bread in their pockets and gave it to all of us to feed the fish. Here is our attempt for a group photo underwater (we didn't do such a good job) and me feeding some fishies! 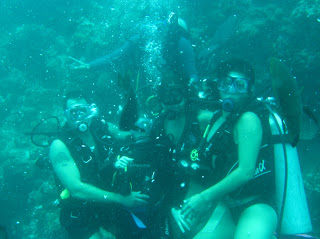 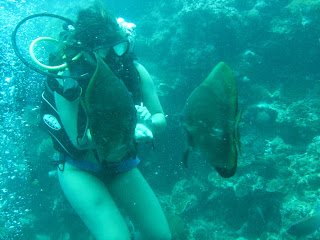 We didn't make it back until about 3 or so, so we showered up and took a jeepney over to Sutukil to meet everyone else. We did a little bit of shopping and then they picked us up and we headed over to the Mother of Perpetual Health church since they were having a mass at 5:30 and it was the celebration of Saint Ann and Joaquin. During mass, we thought we were getting shot at and mom and I both jumped... I was so scared! But as it turns out, during celebrations, they light firecrackers during certain parts of the mass out of respect for these Saints. At the end of mass, there was a ceremonial procession and again, the firecrackers were going off and lots of them! We watched for just a moment and then headed to the van. 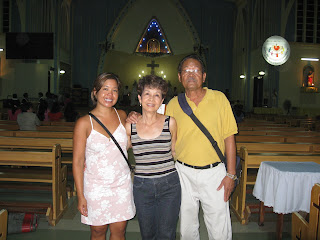 The night ended with a huge meal at a chinese place called Majestic Seafood where Cecilia and I just ordered a bunch of dishes and we all shared. At the end of the day, everyone was super tired and after dinner we went back to the hotel, which was only about 20 minutes away. 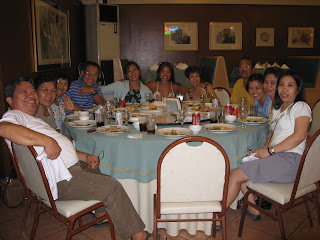 Riza,
I have really enjoyed reading your travel/daily blog. I am confident you are having a wonderful time in life as you well deserve it.

After Fintest this year, I went to St. Lucia for a week in July. The rest of the summer will be spent diving along the Emerald Coast of Florida. I will be going to Tobago in November. That about sums up my dive travel for this year.

Take care and I hope to see you soon. When you return stateside, I will see if we can coordinate a California trip.