Happy Belated Mardi Gras!!!! Yeah, so I am a bit late posting- but thank god that Nate uploaded pics that I could use for my post. I was in New Orleans last week for a couple of reasons- 1) It was my last trip (maybe not... cross your fingers) to the station as their RSD and 2) It was Mardi Gras!!! I missed last year so it was so good to be in town and besides one night of rain, it was gorgeous weather the rest of the time! 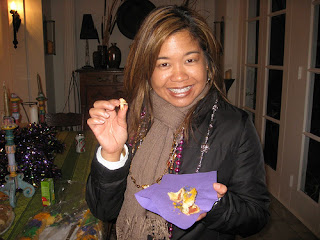 On Friday night, we went over to my friend Wendy's house and had my first piece of king cake all Mardi Gras season! And guess what? I got the baby... just my luck! It rained on Thursday night so on Friday- there were 4 parades that rolled back to back... we paraded for almost 5 hours but it was a blast! It was a long night- thankfully I got a great workout with Gewls at Salvation Studio earlier that night so I was able to hang all night. 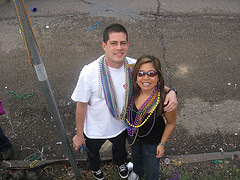 Nate was nice enough to be a gracious host and let me crash (should I even ask anymore?) and we got to spend a lot of QT together... wish I could have stayed through Mardi Gras day- but oh well! I saw so many old friends and co-workers and I even got to see Cyndy dance with the Camel Toe Steppers during the Muses parade! I also got to see Monique on float 23, even though she was flying by me but she pounded me with a ton of beads! By the time she passed, it was around 1am but the crowds were still going strong. After the parade, we continued the post-party at Nate's friend Kevin's house for a dance party but I didn't last too much longer after that. Especially after our $9 gyros that Nate bought us on the walk over to the party... we were definitely done after that. 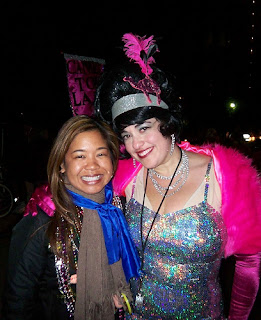 The next two days, the weather was absolutely gorgeous and I met up with Cecilia, Helen and the rest of the Chicago crowd and we met up at Monique's grandmother's place on St. Charles and 1st for the day parades- my favorite. We even got to use Ashley's ladder and got a ton of beads- it was sooo much fun. I love the vibe and walking up and down the street and seeing friends and familiar faces along the way. I miss that about New Orleans and it was definitely a Mardi Gras I won't forget. In LA, some friends celebrated Mardi Gras on Fat Tuesday and I missed that too-- I was on my way to Phoenix where I am now.... I have so much more to blog but will check back tomorrow! Nite nite. 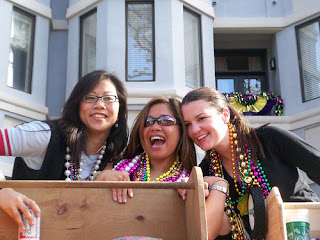