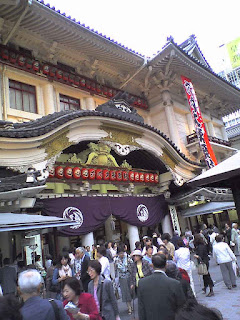 we got tickets yesterday2 go 2 the kabuki theatre where men play all the roles in the performance and they perform 3 sets per show. u are allowed 2 buy tix to one set which lasts almost 90 minutes long. unlike plays and such in the us- you can bring in food and drink to enjoy during the performances, just no photography. it was cool to see this live, but it was slow moving and one set was about all we could handle! we did get headsets that had english interpretations-thank god because we didnt have any idea what was going on! but after talking 2 some japanese women about kabuki,turns out that they dont understand it either bc they speak in an old japanese language(like shakespeare).
Posted by rizanola at 4:58 PM