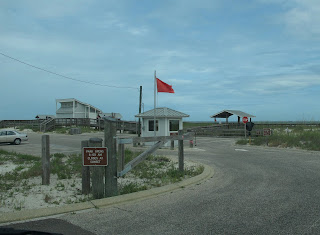 Yesterday, we stopped along Perdido Key to get a glimpse of the oil. It was unbelieveable how empty the key was- not so much because of the oil but just because since I was born here in 1973- I've never seen the beaches this empty- not even during the winter months- and this should be the busiest week of the year. So sad to reach the entrance to this beach and see the red flag. 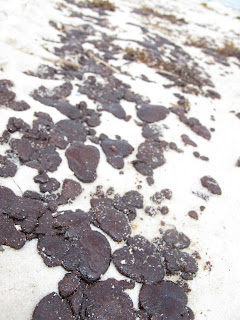 As we approached the beach, this is what we found. Oil all up and down the beach in both directions as far as the eye can see. Some of the oil you can tell had been there for a while (not sure how long a "while" is- maybe a few hours or a few days?) and then some oil JUST washed up. The oil above and t the bottom left was more thick and gooey unlike some of the globs that you can tell were fresh ones that just came on shore.

The crazy thing was that there was no one in sight doing any kind of cleaning up. We saw 2 guys in a jeep driving up and down the beach and at first I thought they were going to tell us to leave the beach but they just passed us and went up and down the beach doing their thing. One thought is that they were there to clean up any animal that washes up on shore that is covered with oil so that no photos are taken of them and can be posted as more evidence. BP is really trying to cover their tracks. 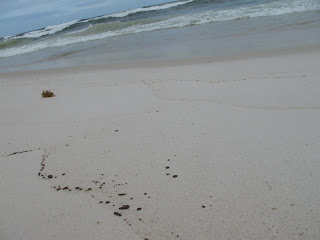 The other thing that was interesting was the water and although at times looked clear, when it washed up on shore- it left this light brown mark- almost like someone poured a bunch of tea in the ocean. This left stains on the beach as the waves would roll back in the ocean. Not a good sign. Also- you can see from the picture below how the surf was definitely heavier than usual- also not good for the beaches. 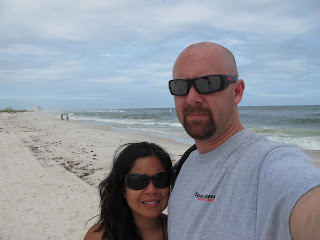 By the time we got back to the boardwalk, we all checked our feet for oil and although we thought we were walking on parts of the beach that had no oil on it-- some parts had oil beneath the sand that you couldn't even see. So needless to say when we got back to mom and dads- we had to wash our feet really good to make sure all the oil was off of us. 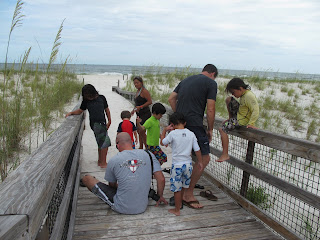 I am so saddened about what is happening to my home town and to the whole Gulf Coast. We are going to Pensacola beach today to see what's going on over there. We will post more- stay tuned.
Posted by rizanola at 9:05 AM

It is all so heartbreaking! And the saddest part is that there seems to be no end to the story. Hugs!

Hi Riza..
I too am saddened and heartbroken by this disaster. As a native Pensacolian,I grow sicker by the day knowing the economical and environmental damage has been done..
the pristine beauty i knew is gone forever..
sad sandy hugs..
Loui♥