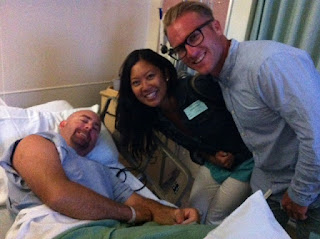 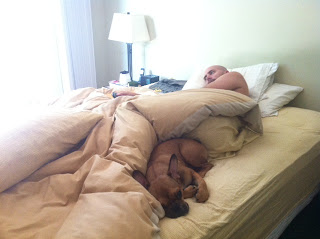 Just wanted you all to know that jeff is home and doing well. He is still in a lot of pain from the actual surgery but his
Leg pain - that was causing a majority of his pain Pre-surgery is totally gone! That was the sciatic nerve pain he was
Feeling from the ruptured disk that was pressing up against that nerve. He will be on his back mostly with occasional walks up and down the street to get his back moving and the scar tissue from building up. Thanks rose and Dave for coming to the hospital and bringing some of his favorite things!!! Now- Louie keeps jeff company during the day and this seems to be his new spot he loves to sleep! Ha!
Posted by rizanola at 2:49 PM